In my last post, I discovered there is an entire research team dedicated to researching Yellow Bellied Marmots. Good thing, because I needed help solving a Marmot mystery that had even stumped the Marmot Whisperer, my most avid Marmot photography friend. 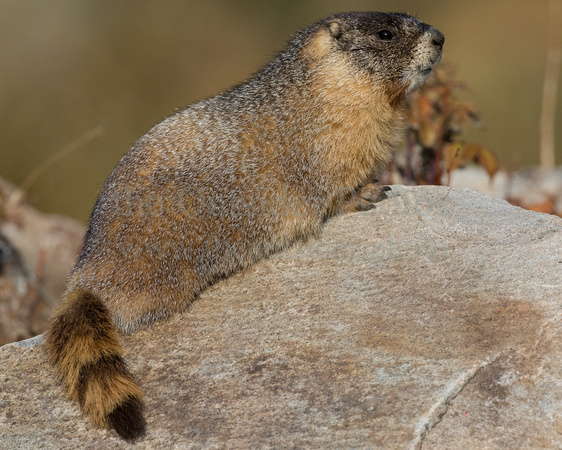 What looks different to you from the other Marmots I shared this week? If the tail is what caught your attention, you got it, too!!! I'd never seen a Marmot with a ringed tail before; all the ones I'd seen before were solid color! This was a unique pattern and I had to know more. Was there some kind of star-crossed forbidden love story between a Marmot and Raccoon behind that ringed tail???

I sought the expertise of Dr. Dan Blumstein, who leads the team of researchers studying Yellow Bellied Marmots. I felt a little silly reaching out to a scientist because I thought he would certainly find my question utterly pedestrian, but I had to know what was up with the ringed tail. Dr. Blumstein was delightfully enthusiastic about my question as we exchanged Marmot stories and pics via email. I had only managed to capture two photos that showed this Marmot's tail, but with just that, Dr. Blumstein graciously answered my questions to the best of his knowledge.

Dr. Blumstein shared, "Looks like a natural artifact of moulting…getting a new coat of fur. Which they do in July/August where we are...sometimes we see stripes when the wind blows a bit but I too have never seen anything like this." Not only did Dr. Blumstein give me the much-needed answer I sought, but the fact that he had never seen anything like this made my day! I was sure he would have dozens of photos of Marmots with ringed tails, but it turns out, even to a Marmot researcher with years of field experience, this was unique!

In addition, he shared more knowledge with me about how to discern gender and age among Marmots, indicating this one was a healthy yearling female; he said the males' noses are more "robust". He also said he concluded this girl was a yearling because "Older animals look a little more 'worn'".

As I later perused the RMBL Marmot research team's instagram, I noticed another moulting Marmots, which helped further my understanding of how the ringed tail developed. Here's an example in this adorable video, during which you can see one of the Marmots has a striped back:

I wonder, since moult happens in July/August and my photo was taken September 25th, whether this beautiful Marmot will retain her special tail for the rest of her life? Since she has already shed a coat of fur this year and grown in her Winter coat, it makes sense to me that she'll still have it next Spring when she awakens from hibernation and up until the next moult. I'll check in with her early next year and let you know!

Grateful appreciation to Dr. Blumstein and his research team. Also, thank goodness for science and scientists. :) Here's one more adorable photo from the Marmot Project researchers!